Posted on September 2, 2013 by PaganRites

In October of 2012 Chris Roberts of Wing Commander fame threw his dice into the Kickstarter crowdfunding game with a project he called ‘Star Citizen’. Star Citizen funded at a little over 2 million. Today, the crowdfunding total sits at $17.5 million, and Robert’s Space Industries just rewarded their faithful backers with a ‘Hangar Module’ download where players can not only view but have some interaction with their pledge ships in their very own hangars. 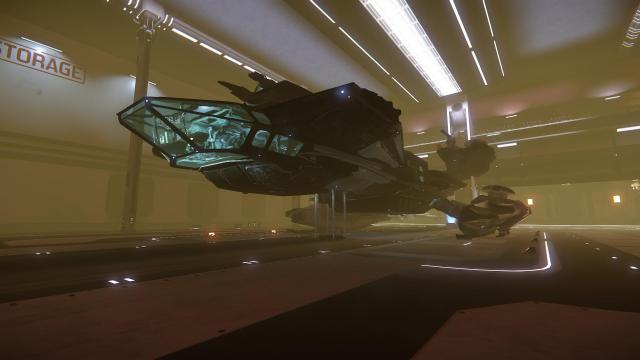 Some ships are still being designed so are not available for preview in the hangar module. Here is a screenshot of one of Pid’s ships, the Cutlass, that only exists as a model in his hangar.

I had posted some images from the hangar reveal which received a lot of attention, so I thought I’d try my hand at taking some in game footage. This is my first attempt at video and narration with no skills in the least, so I apologize in advance. I hope this hangar walkthrough provides some insight into just how incredible Star Citizen is looking to become.

The 300i sits in the dark, waiting for it’s moment.

Non-jaded gamer. I like to support the arts by seeing the positive, even when the negative is in your face. Lover of virtual worlds and the MMORPG genre.
View all posts by PaganRites →
This entry was posted in MMORPG, Online Gaming and tagged Chris Roberts, Roberts Space Industries, Star Citizen. Bookmark the permalink.